As explained previously an Excel/vba macro is used to generate an AutoCAD script which is written to a default folder, and then AcadLT is launched from vba using command line parameters to run the Acad script automatically as Acad loads. The model space output of the script is shown in Fig 1, and the paper space output shown in Figs 2 to 6. 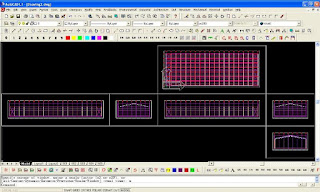 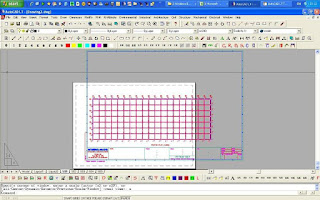 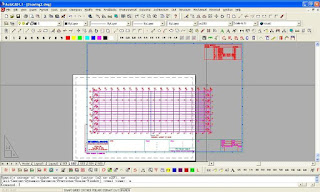 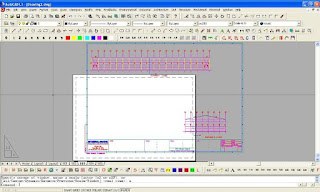 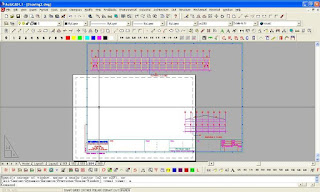 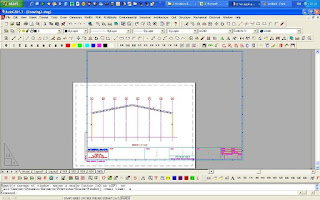 At present the script doesn't modify the paper space layouts to match the paper size. This is largely because in the first instance it requires using "print" and adjusting the layout parameters and then cancelling the print command. It can crash if invalid paper size names and printer names are provided, so it was left out. Text is all placed in paper space, with exception of the grid labels which are written in model space. The input parameters allow varying the paper size, the scale, and forcing either one view per sheet or everything to a single sheet. The scale can also be selected to be calculated. Either way the vba macro will determine one of a few different preferred layouts, and attempt to use as few sheets as possible. All the parameters to define the structural frame can be varied. Spacing of frames, girts and purlins are assumed to be constant. Except for the simplest of buildings, usually after the script has run a great deal of manual editing is required to produce finished drawings for development approval. 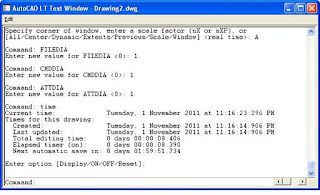 As can be seen from the screen capture, Fig 7, the script takes less than 9 seconds to run, this is significant decrease on the 5 to 20 hours that may be required for drawing such stick diagrams from scratch. Another 5 to 40 hours may be required for drawing connection details and other relevant detail sections. Given that the shed industry typically does not produce formal drawings, only a freehand sketch on square ruled paper order form, taking some 10 to 60 minutes whilst salesperson talks to customer: collapsing the drafting time is important. Whilst the freehand sketch is suitable for a small garden shed, its not suitable for a 4000 sq.m industrial warehouse with office space. But people go to the shed suppliers on the assumption that they have solved all the problems before and have standard designs which can be modified. Whilst the industry advertises custom manufacture it cannot provide custom design. The industry relies heavily on the local council, requesting further information, before they go and get architectural and engineering input. This results in delays for the customer as issues of  non-compliance with building codes are resolved.

Whilst high end building information modelling (BIM) software may be useful for the task, it is too complex for sales people to be using at the point-of-sale, and with costs from $5000 to $25,000 (AUD) per license it is also far too expensive. {Though any shed supplier setting up own engineering staff and making  use of such software, has the potential to make it financially viable, taking advantage of the software to improve their product and increase sales.}

Whilst the suppliers run around from one consultant to another, requesting standard designs for one shed or a range of sheds, there is a need to develop low cost, highly product specific software which produces drawings, and structural calculation reports, along with material take-off's,  cost estimates, and work shop details, along with any CNC machine instructions if appropriate, to resolve the problems of not using standard designs correctly.

There is already precedent for such software with the nail plated timber roof truss manufacturers, however their software started in the wrong direction: it failed to provide adequate evidence-of-suitability and was proprietary. This made it difficult for council to check the adequacy of the proposed trusses, and there is still need for improvement, but there is now a guide line for such software, put out by Planning SA.

The problem with such software is that it tends to only produce specifications, and it can do so in a short period of time, a few minutes. Compare this to a few hours to check all the different roof trusses in a typical house, using either manual methods or standard frame analysis software. It seems no consultants providing technical certification services has automated their standard frame analysis software for checking timber roof trusses. Similarly they also haven't produced automation for sheds, carports and verandahs. So the industry can do fast, but the checkers and certifiers are slow. The big question though is the industry fast because its not doing engineering checks, or because it has fast design tools, and have those design tools been checked and are they being used correctly. Hence developing and releasing the software not just a matter of writing source code. Hence these things tend to get part developed as useful in-house productivity tools rather than commercial products. But not everyone has the time to develop such tools in-house, and that causes hindrance, and delays, when at the certifier level. So tools need to be readily available to all, not just limited to manufacturers, possibly under a GPL, so that source code viewable by all.

Any case primary task at moment is to reduce the drafting effort, since calculation effort has largely been reduced already for the typical gable frame shed.