My spreadsheets DAO and 64 bit Windows 7

In process of reluctantly moving over to Windows 7, found a problem with my spreadsheets. Didn't want to change operating systems, but faulty power adapter connection forced me to get a new computer, that was about 18 months ago. Thus far the 64 bit Windows 7 computer been a good dust collector, as little installs on it, and it is otherwise slower than a wet weekend. What's with the spinning cursor, just execute the command already, instead of unnecessarily animating stuff: supposed to be a general purpose personal computing device not video game. Software developers seem to have lost the plot about what a personal computer is, and difference with a micro-computer and the importance of stable infrastructure. Not to put too fine a point on it but a virus is an annoying irritating piece of software which interrupts the users use of their computer: eg. Microsoft updates are a virus. All computer seems to have done for past 18 months is download updates: switch on to move software licenses, cannot do anything because updates need installing, runs out of battery power needs recharging, go do something else. Get more spare time, repeat same process, during which process seems to have got infected or otherwise messed up. Internet explorer dead, camera not functioning, and cannot install software for. Seems like may have to wipe clean and re-install from scratch. And there's all this rubbish about XP being defunct: its working perfect. Any way write more about operating systems and personal computers later.

Since I don't have 64 bit office, not even current for that matter (why would it need to be, I customize my own stuff), it seems that the Microsoft DAO 3.6 object library gets placed elsewhere. Normally it would be:

On 64 bits using 32 bit software its likely to be:

So to use my technical library will need to manually change the reference in the vba editor under tools references.

When first started with computers I avoided Microsoft products and stuck with Borland (Turbo Pascal, Turbo C, Quattro Pro, Paradox). I cannot go back down that path, but considering the free software options which are available on both Windows and Linux platforms. Start with them on Windows get used to them, and then move over to Linux. Zorin OS may be something worth looking at. There are a lot of problems to move over to Linux, from major applications (AutoCAD, Multiframe) to small utilities (xyplorer, beyond compare). But back in the early 1990's most high end graphical engineering software required a unix workstation: and likely a specific workstation like a Sun sparc. The problem being drivers for graphics, mice, and printers. At DOS every software developer needed to write drivers for their own application, and similarly with unix/Sun OS locked  to specific or limited range of hardware. MS Windows eliminated part of the problem, if the computer could run Windows then chances are could run specialist software.

The problem we have now though is not about supplying to meet needs, but changing stuff to acquire future income. Need and demand been satisfied, so what can be done to generate income tomorrow. I know, lets knock all the bridges down, along with the power stations and water filtration and pumping stations. Got a new fangled super material and I reckon it would be unsafe, a major national security risk, to keep all these things made out off that rubbishy concrete stuff. Whilst we're at it lets rip up those copper wires and optical fibre rubbish: you know the ones that connect the internet. And those tarmac, asphalt and concrete pavements they're ugly so lets get rid off them to: I'm sure we can think of something to replace them with, might but half defective and inferior. Wheels yeah, lets re-invent them, triangular ones they'd look good: wouldn't work, but who cares its change, and shouldn't resist change. There is just so much garbage on the internet about upgrading, and resistance to change. You do not destroy the heritage, the infrastructure the foundations on which everything is built.

Windows 8 apparently would be faster than Windows 7, and possibly fix the speed issue I have, but its likely more incompatible with the software I want to run. All I needed was new hardware. Software is expensive and bought progressively over the years: but having got, its not so easy to put aside and replace progressively.

On the other hand I did have a personal policy that engineering stuff I'm supposed to be able to do with pencil and paper, we should develop software in-house for and not depend on commercial software. So CAD or graphical editor is really only obstacle to moving to different operating system: most anything else just requires a compiler or spreadsheet.

However, there is no point to changing operating systems or application software if it is automatically updating on a regular basis. Once installed I expect the software to remain unchanged unless I find a problem with it. As for the internet and security, it is not necessary to be connected to the internet all the time, or have every device connected to the Internet.

We still operate DOS boxes because some software no longer available, or if new Windows version is available there is no benefit which would justify the expense, and otherwise doesn't function at Windows command prompt. I don't believe that kind of updating should have occurred, after all MS DOS ran from a 720 kbytye 3.5" floppy disk, so it should have been possible to fully accommodate in the 1 o 2 Gbyte bloat of the current Windows operating systems. From memory Sun OS had a full MS DOS installation which opened in a separate process window.

So it shouldn't be a problem to have an operating system which spawns different operating environments in isolated containers visually indicated  by windows. I think exists already and its called Unix. 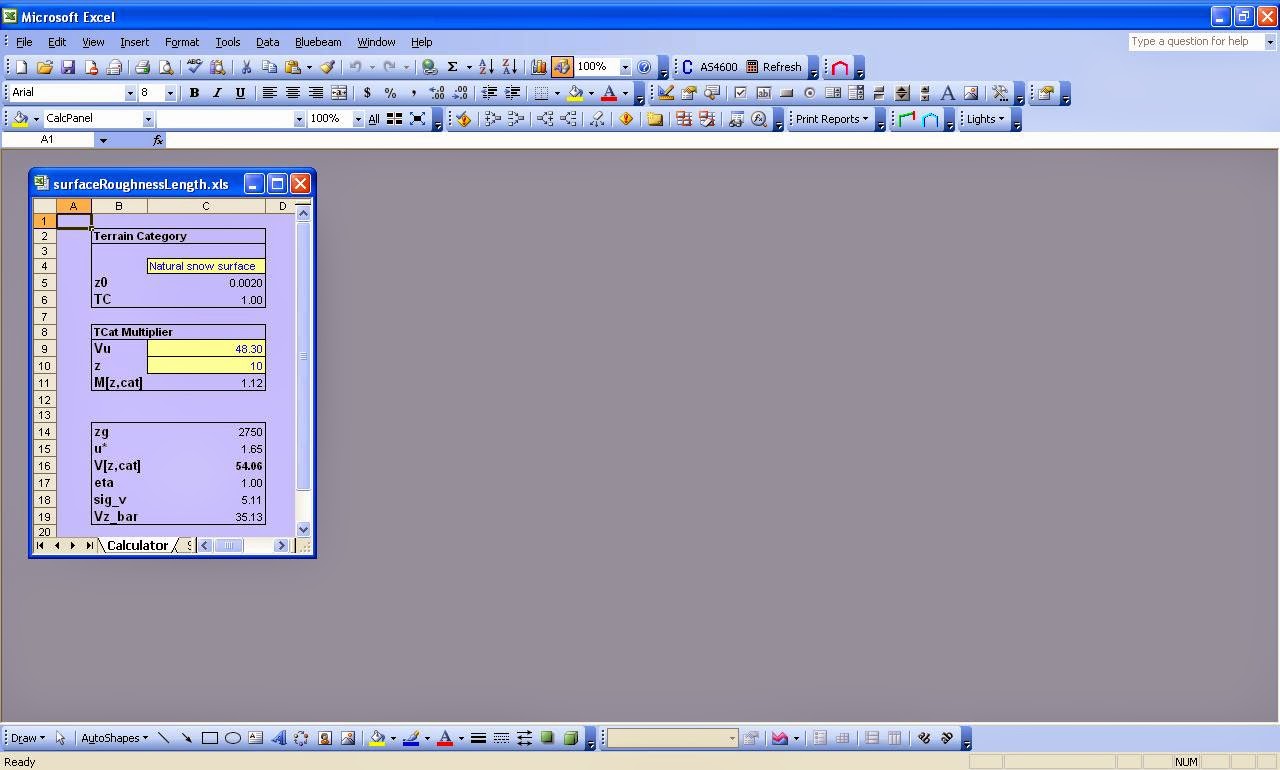 A simple spreadsheet making use of AS1170.2:1989 Appendix E. This appendix provided formula for converting surface roughness length (z0) into terrain category and for region A the calculation of the terrain adjusted wind speed or otherwise the terrain category multiplier (Mz,cat).

AS1170.2 commentary contains a design chart which identifies various terrains and gives the surface roughness length (z0). From this chart it is apparent that most rural properties are not TC3 but also they are not TC2. By the use of z0 an intermediate terrain category can be calculated and more economical designs are possible.

The spreadsheet can be downloaded here: surfaceRoughnessLength.xls 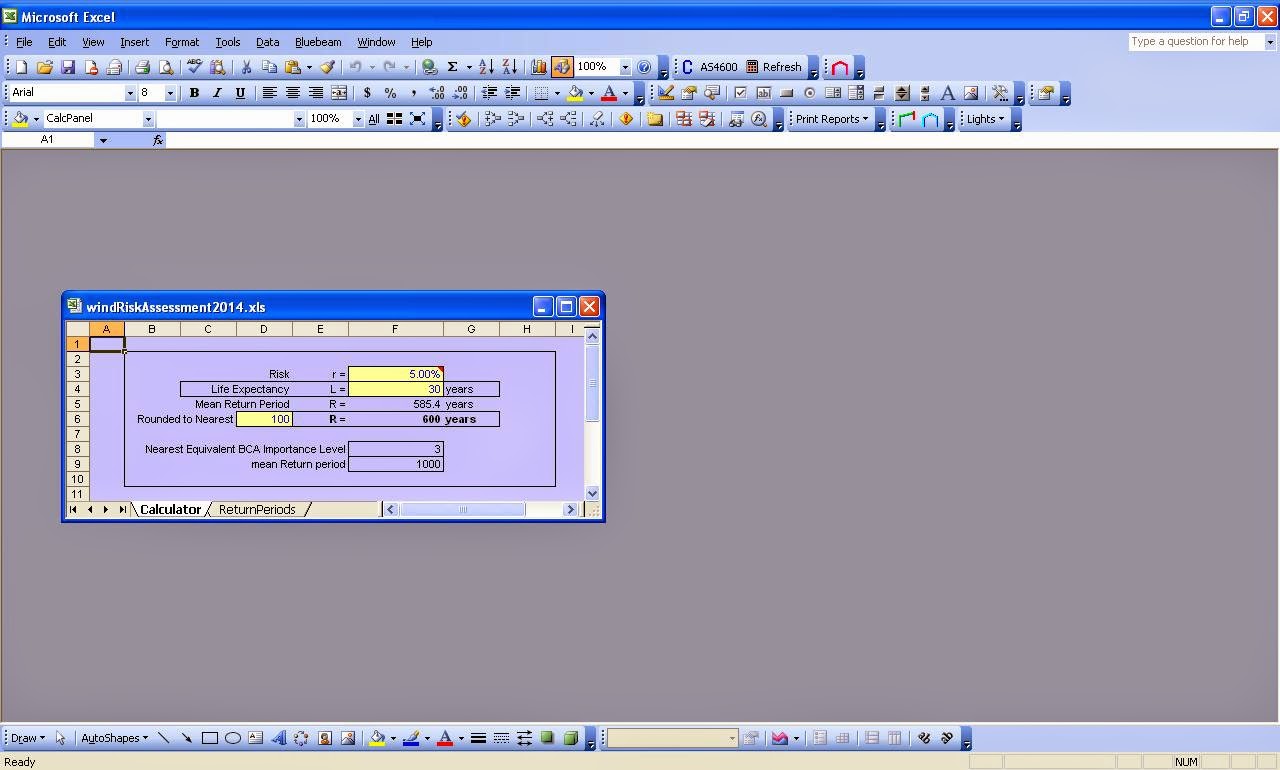 A simple spreadsheet which allows varying life expectancy and calculates the mean return period (R) for the regional wind speed. It is based on formula in Wind Loading of Structures by John Holmes.

The file can be downloaded here: windRiskAssessment2014.xls 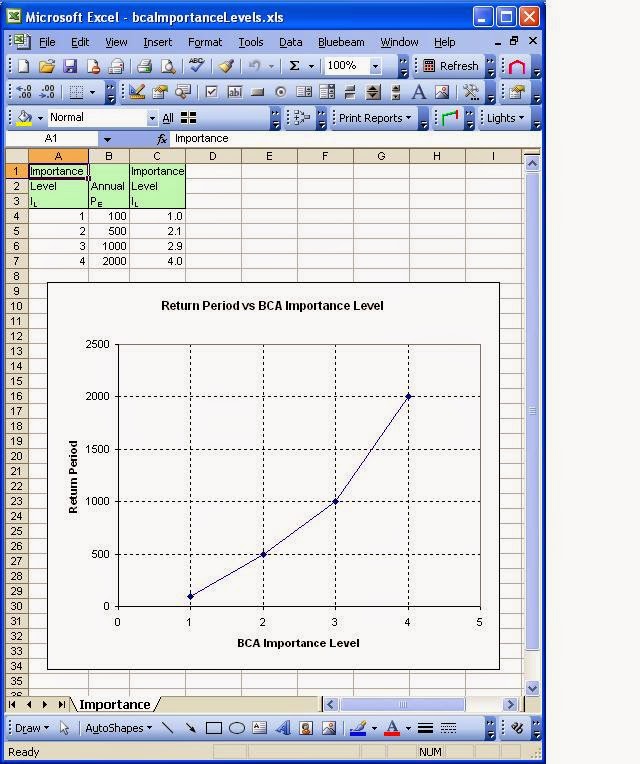 Whilst AS1170.2 allows for any mean return period, the BCA has limitations, which are not always suitable, starting with the fact that the BCA is primarily about habitable buildings and anything which is not a habitable building becomes BCA class 10. However the BCA is not suitable for design of any structure classified as class 10. For example a garden shed or carport may be suitable to be designed to BCA volume 2, but a 600m high radio mast is not.

The spreadsheet can be downloaded here. bcaImportanceLevels.xls