Old Dos program I wrote, in Turbo C, somewhere around 1993, for calculation of soil heave and classification of sites to AS2870. The program was last update in 1997. Its a relatively simple calculation, and have written the application in a variety of application languages. We stopped using the program around 2000, when I converted the code to vba and added to MS Excel. Then we otherwise added the look up tables from AS2870, and included interpolation for those tables based on stiffness.

Besides the need to calculate the soil heave, the program was mostly written as an experiment for testing graphical user interface (GUI) as described in the book:

Though MS Windows eventually became popular and the need to write own GUI disappeared. Any case the application was testing various common features available in applications at the time: some of which don't work in MS Windows cmd prompt. I believe the source code for the book was available on disk, but since had to send of for it, I decided better to type all the code up as a learning exercise rather than wait for a disk to arrive. The code printed in the book did have some bugs in it.

The program can be invoked from the command line in the Windows XP,  cmd prompt window:

will display the following help. 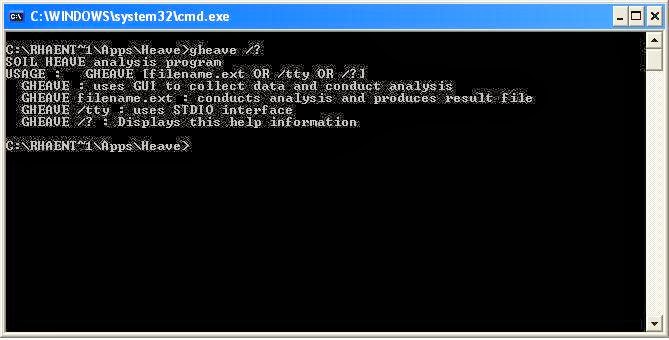 The program can be called with a filename to automatically run the calculations and produce a result file. The result files have extension ".res". Not a good idea on windows systems, but not particularly a problem when the program was written. If no command options are given then it opens with a flash screen, and then into the GUI. {Actually its a text screen based GUI rather than a graphics screen GUI like windows.}


The view results no longer works as that was simply displaying the results file to the DOS screen, also shell out to OS Shell doesn't work. Printing I never implemented: it was a hassle writing programs to support different printers: a problem which MS Windows removed. Not that I really had a problem, just send the results to a printer using the DOS print command, as its only a simple text file.


On Footings
Some 80% of footings we have done in the office can be selected from the tables in AS2870, so all really should need to do is classify the site, then aplan drafter, building designer or builder should be able to document the footing directly to AS2870 without need for an engineer. Unfortunately South Australia has a culture of seeking an engineer to size the footing, plus the people who drill and log the soil cores typically don't classify the site. If the soil loggers could classify the sites and also add their data to a soil heave contour map, then I believe that would significantly improve design of residential footings.

The above map is experimental obtained from an MS Access Database, with site locations stored using UBD map references, and translated to Australian Map Grid coordinates . The contour map was generated whilst the professional features of Map Maker gratis were active during the trial period {I did the experiment a few years back.}. Should I ever get the time I may consider a more rigorous attempt at producing a soil heave contour map. Any case the first requirement is that all soil core data be logged in a database and associated with map coordinates. Something which the local councils or the state planning department could do, as all data converges in their offices, when building approval is sought.

At present I consider the one major defect in the whole process, is that the owners, building designer or builder has already decided on a concrete slab on ground before going to an engineer. It is not necessarily the best option: to a certain extent people are throwing a lot of money into the ground to hold up what amounts to a lot of decoration. A soil heave map would allow taking site considerations into consideration a lot earlier.

Also with respect to AS2870, interpolation of the tables can reduce footing size, and thus concrete volumes, if the actual soil heave is at the lower end of the classification range.

When the magnitude of the soil heave, or other characteristics of the site, make the footings beyond the scope of the AS2870 look up tables then will typically need to determine footing size using either slog or cord and employ the services of an engineer to do so.